Introduction
* Please note that this is an older review, hence why it is posted in the old format.
** My computer crashed and I lost my save file, this is why the first level is seen in the video and no full weapon rack.

Did you ever feel like spiders are everywhere? They could be hiding under your keyboard, waiting to jump scare you! Did you look? In this game, you are the exterminator and you will need to kill spiders in the oddest ways possible but mostly with fire! Burn, baby, burn! You will collect a wide array of weapons to kill those pesky spiders, you can even kill them with balloons or an anvil lifted with balloons. Kill it with fire is a mission-based game fused with some first-person shooter elements but it also challenges you with puzzles and hidden items.

You have a spider radar that shows you where the spiders are hiding but it might be wise to inspect some items to see if they are hidden under there. In this game, you can also throw televisions around or wreck complete homes just for the fun of it! During levels you will also gain skill points and find batteries, these are for upgrading the simple but effective skill tree. I hope you are ready for some jump scare effects, and that you are no afraid of spiders or have arachnophobia. People with arachnophobia should avoid this game at all costs unless they want to face your biggest fear. I do want to let you know that there are special settings for people with arachnophobia.

What did I think of Kill it with fire before playing?
I was very interested in Kill it With Fire because I wanted to burn down some spiders, yep that’s all folks, not a special reason here!
I saw this game come by on a sale and I messaged the developers but sadly I did not get a response, a few months later I decided anyway to buy this game myself.

Before buying Kill it With Fire I decided to look up a few trailers and check the Steam page thoroughly for information on the game.
There are many spider types to fight and many extreme ways to kill spiders, you can vacuum up spiders or even use C4.
Did I mention there is also a rocket launcher, who wants to blow up some spiders with a rocket launcher? I learned that the game is mission-based but small, this was not a problem for me.
I decided to buy the game to try and learn the truth about the spider invasion.

I rate Kill it with Fire with a 7.5 before playing.
Not a major game title but not the smallest either, I knew this was going to be an extremely silly game where you get to destroy everything, why? Because we can off course! 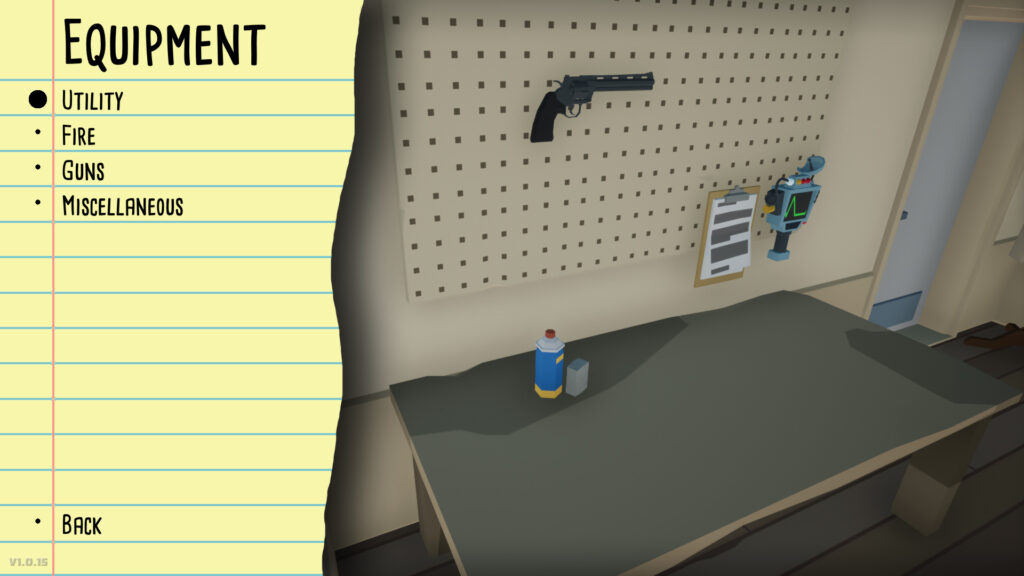 Story
There is not a huge story but it is there, you are the exterminator and the spiders are plotting something, you are the last hope for humanity. Can you survive the onslaught of spiders and find the classified files that hold the truth?

The truth is out there, I want to believe!

I rate the story of Kill it with Fire with a 7.0
I wanted to rate the story lower but wait till you see the ending of the game, the ending was the opposite of what I was expecting. I hate cliffhangers, I wonder when the next game in this series will release?

Gameplay
In this game, you hunt spiders, but the spiders can hunt you as well, they jump, crawl and annoy you! Luckily you are immune to taking damage from spiders because you are the exterminator after all! You start the game by choosing one of the missions, you can see what you need to find in the level. Some items can be very well hidden. The further that you get in the game, the bigger the list will become. When you enter a level, you will need to complete goals to unlock skill points. In the levels, you can also find drawers, safes, or any other items that are locked. To unlock these, you need to complete the goals in the levels, kill more spiders and the doors will open. Complete more goals and some things might open up for you, these often include upgrades or maybe even a new weapon. On every level, you can also find an omega file to find out the truth about the spiders. 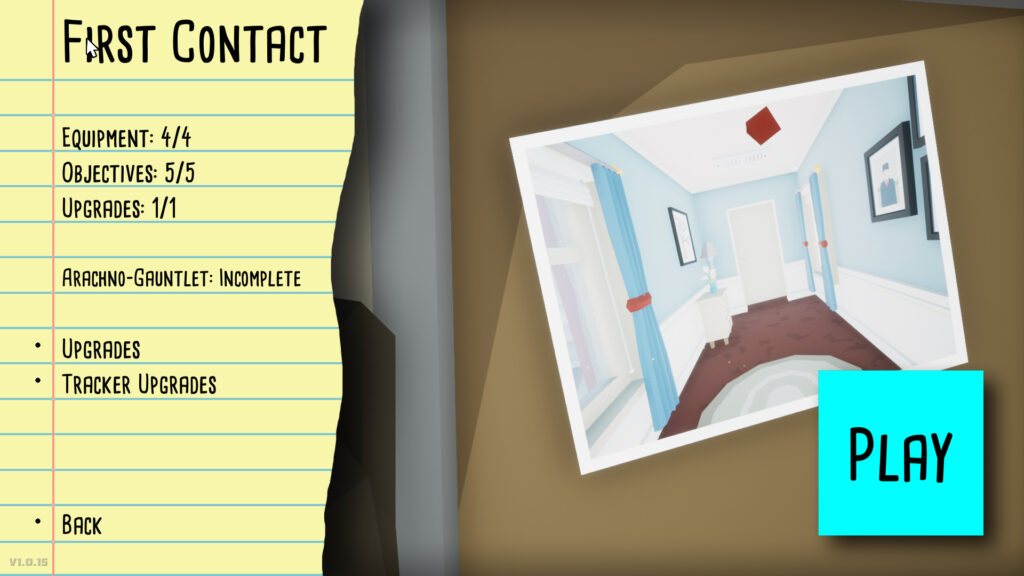 At every level you will find a boombox that lets you access a challenge for the level that you are playing, these can differ from level to level. Some of the challenges can be quite hard to complete but others are done easily. One of the challenges is to kill a certain number of spiders with a revolver without reloading but be careful you also have a timer! It might be wise to re-visit levels later on as you get to keep weapons and upgrades from later levels. The best weapon, or rather drink, to complete these challenges is the energy drink. The energy drink will slow down time, this way you can easily take care of some of the spiders in the challenge! To find the truth you will need to complete all the challenges at every level!

Some of the skills that you can learn might also help you in clearing the challenges, the skill trees are divided into two paths. Clearing goals will give you points for your character and finding batteries allows you to upgrade your spider radar.
One of the upgrades for your character is that you can actually sprint, this was quite helpful for me. There are also weird upgrades like turning into a goose or shrinking down to a tiny character. You are not able to select all upgrades even if you have all the skill points available in the game. If you feel like you did something wrong you can reset your skill points indefinitely.

The spider radar has a completely different set of upgrades like the arachnodex, this will show what spider is hiding where, this might be useful to know since there many different spiders like exploding spiders or jumping spiders. 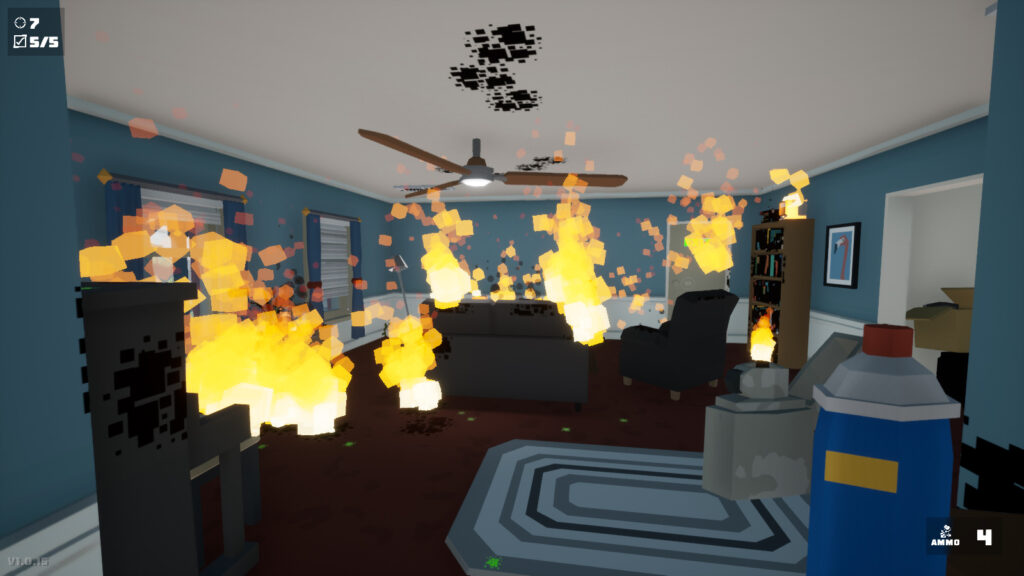 II rate the gameplay of Kill it With Fire with a 7.5.

The game is quite small but still very fun, you can even get infinite ammo at the end of the game! Apparently, there are killer drones that explode in this game, bye bye spiders!

Sound and Graphics
The graphics are not bad but also not the best around, the game is centered around creating as much destruction as possible, the current graphics make this very doable.
Let’s throw around that television, did we hit the spider? No? Throw the PlayStation on it! Still no hit? Throw the controller!
The sound and sound effects were nothing special but they did fit the game.

What did I think of Kill it With Fire after playing?
I have enjoyed the game more than I had expected but Kill it With Fire lacks gameplay hours as you will be able to complete the game in five hours.
I do feel silly being jump scared by a spider, lift the toilet seat, jumping spider! If this was real life, that toilet would have been gone when hit with a rocket launcher.

There are many different kinds of spiders that you can kill, there are even necromancer spiders, zombie spiders will inhabit the same powers as they did when they were still alive.
The story was weak but finding omega files was fun, the ending saved the weak story more than I expected. The truth is out there, who knows what you will find!

My favorite weapon was the garden trimmer, odd right? I wonder what would happen if I tried this at home, thankfully for the spiders I don’t have a garden or a garden trimmer.
Even though I would recommend this game, it will not take you long to complete the game, it might be better to wait for a sale.

I rate Kill it with a Fire with a 7.0 after playing.
Even though the game did exceed my expectations I am giving it a lower rating due to the shortness of the game.

My personal rating
I loved how much variety there was in killing spiders, some of the missions were a bit hard but not insane. I wonder how many times I have typed spider in this review. I also found an easter egg in this game, this certain easter egg brought back some memories. 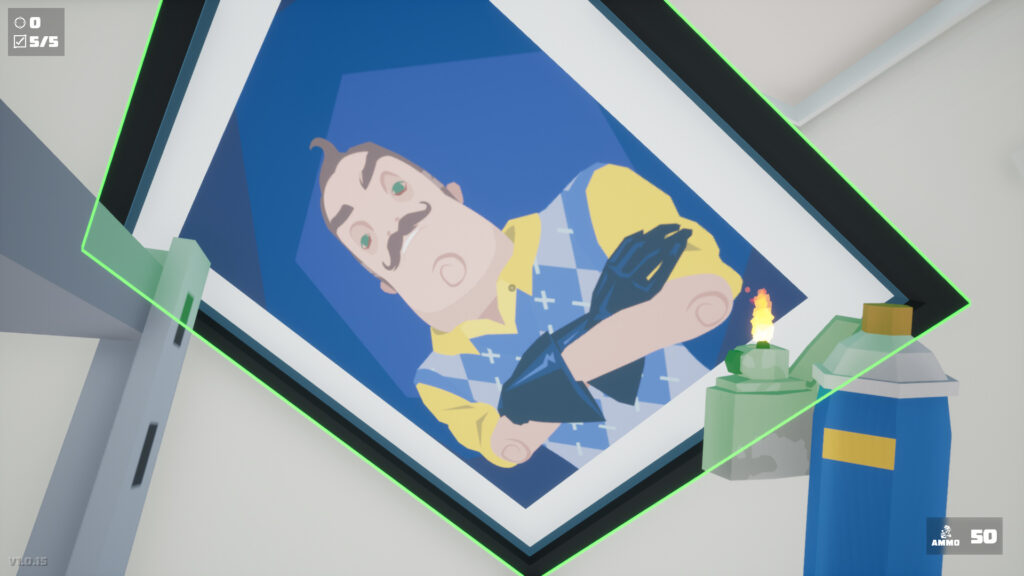 Are you interested in the backstory?
Read all about it in this review!
https://www.reviewsbysupersven.com/2020/09/05/hello-neighbor-review/.

My personal rating of Kill it With Fire is a 7.0

Pros
– There is a huge variety of weapons to annihilate the evil spiders.
– The challenges are varied and fun to complete.
– The game includes skill trees and hidden items to find to add new skills.
– Large variety of spiders to kill.
– You can create a lot of chaos in each level by blowing stuff up.
– The truth is out there!

Cons
– This game does not have the best graphics.
– The soundtrack and sound effects are mediocre at best.
– Low replay value.

I would recommend this game when it is on sale, the game is too short for a big price.
The final rating of Kill it With Fire is…Drumroll…

Let me know what you think of this game in the comments.
I hope you liked reading this review, I hope to see you in the next review!